Below is a Deriscope formula ds(...) shown in cell E2 that creates a vanilla interest rate swap represented as a Deriscope Object, of which the Deriscope Type is formally Vanilla IRS. 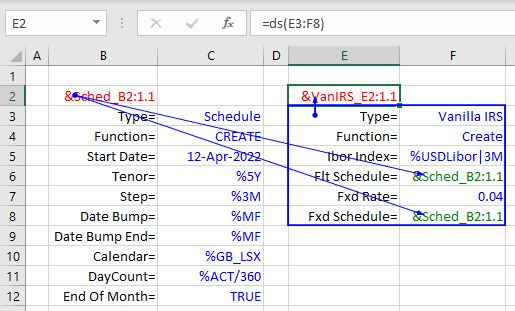 This is actually obvious from the shown text Vanilla IRS in cell F3.

The formula has been generated and pasted in cell E2 by the wizard and is shown to take as input the range E3:F8.

The question is how can the user understand the meaning of the various data in that input range.

Provided the wizard is open, all the user needs to do is select the cell that contains the data under investigation.

For example, as soon as the user selects the cell E7 containing the key Fxd Rate=, the wizard display a description of the selected key at its Info Area, as shown below: 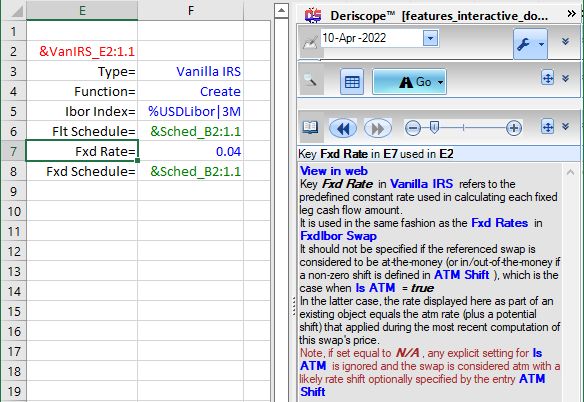 As another example, the cell C8 contains the text %MF, which is a handle name of some object. The prefix % indicates it is the handle name of a trivial object. After selecting that cell, the Browse Area of the wizard displays a grid containing just a single row with the key-value pair Name= MF

Selecting, next, the cell with the MF value, the following description appears at the bottom of the wizard: 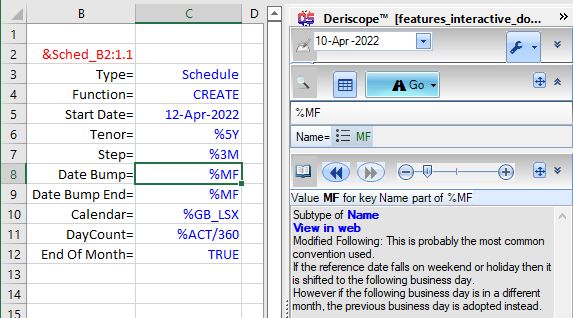 Numerical input data can be edited in the usual way by typing in the new numbers.

Some input data may allow only certain values, in which case a cell dropdown with the allowed values is generated and attached to the respective cell as soon as that cell is selected, provided the wizard is open. If the wizard is not open, the cell dropdown can still be created by selecting the cell and then clicking on the Cell Info ribbon button

. For example, after the cell C12 is selected, a cell dropdown appears at its right:

When the dropdown is clicked, the user may choose one of the allowed values that appear below the cell:

When the selected cell contains a date and the wizard is open, a calendar appears that shows the existing date and allows the selection of another date. Below this happens after the cell C5 is selected:

When the selected cell contains a trivial object, the object's contents appear with green color inside the wizard. The green color indicates the shown values represent the contents of the selected object, but they are still editable. In the example with the cell C8 above, the user can edit the value MF in the wizard, either by typing in some new value or choosing one from the list that appears after clicking on the three lines

Below is a Deriscope formula shown in cell K2 that returns the result of a risk calculation undertaken by another formula in cell H2.

The risk output consists of two numbers pointed by the keys YIELDCURVERISK= and YIELDCURVE1RISK=.

It would be hard to guess what these numbers refer to, without the wizard's help. Fortunately, selecting the cell K2 containing the key YIELDCURVERISK= produces the following wizard description for that key:

Viewing the Contents of Deriscope Objects

While a Deriscope object may occupy in the spreadsheet just a single cell that contains a handle name, it may be linked to a significant amount of data. These data can be viewed in the wizard by selecting the hosting spreadsheet cell. They may be also optionally transfered to the spreadsheet through a special Deriscope formula that would be then dynamically linked to the input data on which the object depends.

An example that occurs frequently in practice concerns the display of the cash flows associated with a financial product. The cell H2 above contains the handle name &VanIRSVal_H2:1.1 that represents an object of type Variant that contains the pricing result. When the cell is selected, the wizard displays that object's contents:

Except the Value= element, all other rows contain objects, as indicated by the lens symbol

at the left of their respective handle names. All these objects can be inspected by clicking on

. So, the object associated with the Extra Data= key appears as follows: 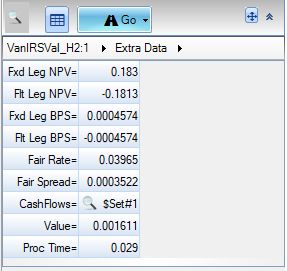 The inclusion of objects can have a never-ending cascading character. Here one observes that the original Variant object contains a few key-value pairs, where the values are mostly numbers, but the value associated with the key CashFlows= appears to be an object again. Even that object's contents can be displayed by clicking on its 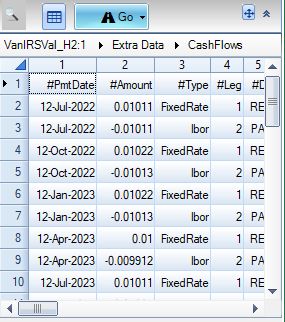 The scroll bars appear because this object's data consist of a quite large table.

The whole table of these cash flows may be now transferred in the spreadsheet by first selecting an empty cell and then clicking on the Go button. It is also possible to only transfer a pre-selected portion of the data appearing in the wizard. In all cases, the data will appear in Excel as the dynamic array output of a Deriscope formula and will thus be dynamically linked to the rest of the spreadsheet. Below, only the first 5 rows and 10 columns have been selected and the wizard generated and pasted in cell N2 the shown formula. The last argument is the string "1,5,1,10", which simply means rows from 1 to 5 and columns from 1 to 10.

It is impossible to work with any kind of a financial derivatives analytics application and not bump quite frequently on errors or nonsensical output caused by some oversight on either the correctness of input data or the formula syntax. Acqknowledging the substantial productivity being lost in hours of trying to resolve such errors, Deriscope has elevated the tasks of error handling and diagnostics to the highest possible priority. When something during the calculation goes awry, the function returns the handle name of a special object that contains full information as to the possible causes of the failure. But even when the calculation completes normally, the user is still offered the option of inspecting the algorithmic steps in order to ensure the correctness of the actually undertaken procedure. More details on the important subject of diagnostics can be found at Handling Excel Errors.